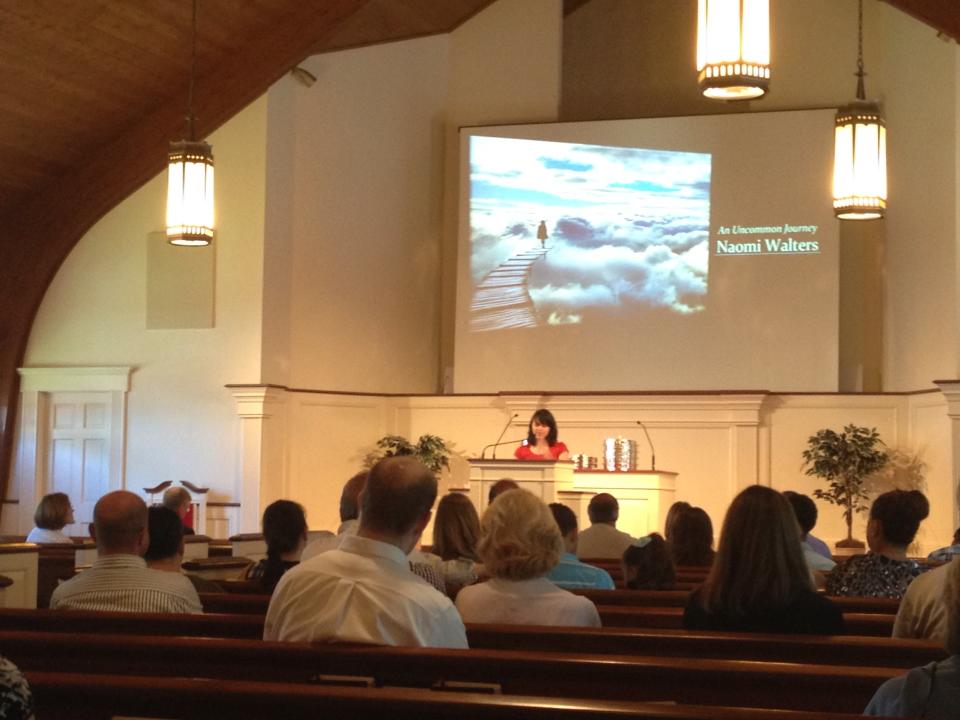 My call to ministry is less like a Burning Bush or a Damascus Road situation, and more like a matrix of personal skills and life situations that make a particular path a good fit. My path is made up of steps that, only in retrospect, show that God was leading me to ministry, to what turns out to be this moment. Dale has already given you a sketch, but I’d like to share more with you about a few of those formative moments.

I was raised in the Church of Christ. My parents gave me a love of church. We were there Sunday morning, Sunday night, Wednesday night, Saturday youth group, summer church camp, potlucks (though we called them fellowship meals), small groups, picnics, work days…you name it, we did it. And church wasn’t just somewhere we went, it was what we did and who we were – you can go to a building, that is something you can do, but you can’t go to church ’cause the church is you – you know. My parents’ best friends were from church and my best friends were their kids. We lived in community. Churches of Christ were my people. And these were the people who gave me a love of Scripture: reading it, studying it, memorizing it, Bible Bowling it – even teaching it (to other girls and in children’s church, of course).

When I was deciding where to go for college, I only considered Church of Christ schools; I chose Rochester College (in Michigan). I started out as an English major, then became a Bible major because those were the classes I was most excited to attend. But I was intentionally “just” a Biblical Studies major, decidedly not a ministry major. My intention was to go on to get a PhD and teach college Bible courses. But even Biblical Studies majors have to take a preaching course, which I put off literally as long as I could, until my Senior year. And in that class I discovered that I loved preaching, that I was good at it even. But at this point, I didn’t think it was worth fighting over or fighting for. Upon graduation, I planned to pursue the M.Div., but, again, for the purpose of going on to a PhD and teaching college Bible courses.

For my M.Div., I chose another Church of Christ school, Abilene Christian University. This was the first time I had female classmates who wanted to minister in Churches of Christ; at Rochester the only other female Biblical Studies major was also “in it for academics” – at least at the time. So my first passion regarding gender justice in Churches of Christ was advocacy-based. It wasn’t for me; it was for my friends. Again, I put off taking the required preaching course until my last semester. Again, I found that I loved it. And again, it was confirmed that I was good at it. But this time around, I also found that I wanted to do it, that it was worth fighting for. What had started out as advocacy had turned into hope. Abilene is also where I met and married Jamey, who was planning to do a PhD and teach Bible at the college level.

These two factors led me to reconsider my long-held plan of doing a PhD: First, since it is unlikely that Jamey and I would receive tenure-track teaching positions at the same university in the same department. But second, and mostly, because I was ready to admit that my plans to teach were at least partially denial. (I was also able to teach a few undergraduate courses at ACU, and found that to be something that I enjoy and have skill in as well, so this is not to say that teaching is nowhere in my future; just that I was hiding behind it.) I was afraid that being honest, with myself and with others, about my desire to preach would open the floodgates, that it would consume my life and make it impossible for me to both be faithful to who God had made me to be and to continue to love God’s people. It turns out there was good reason for this fear. My initial steps toward speaking out for gender justice in Churches of Christ were met with anger, resentment, condemnation, judgment, disappointment, and confusion – by complete strangers and, more painfully, by some very close to me.

It was in the midst of this that we moved to Princeton for my husband’s PhD at Princeton Theological Seminary. In this time of transition, as we searched for a church home, I thought of leaving Churches of Christ so that I could more easily find work in a church. In fact many people suggested that I do just that – some suggested it to get rid of me, others suggested it out of concern for my spiritual health. I thought of it, but I never really considered it. I could no more leave Churches of Christ as I could leave my family. Just as I will always be my parents’ daughter, I will always be Church of Christ. Even if I stopped attending a Church of Christ and attended another church, Churches of Christ would not stop being my people. They are the tribe that formed me, that instilled in me the very gifts I now want to use for ministry. Although I am certainly not what my church intended or could ever have imagined, the fact remains that it made me who I am.

And, again, there’s the question of advocacy. I have other female friends who want to preach. I have nieces. I have friends with daughters. Maybe someday Jamey and I will have a daughter. There are women, young and old, many of whom I have never met, who have been silenced and ignored. If everyone who wants Churches of Christ to change leaves, what will become of them? I felt – I still feel – that as long as God gives me the strength to stay, in fact even on the days that I’m not so sure I have that strength, Churches of Christ are where I’ll be.

This commitment is what brought us here to Stamford, even though it is a two-hour drive from Princeton. I had heard about Stamford in undergrad at Rochester from my friend and fellow soccer player, Hudney Piquant, who attended here. I had heard about Stamford while at ACU, that it was one of the few Churches of Christ in the country who had welcomed women into its pulpit. I had heard about Stamford from Justin and Kat Burton, who Jamey knew in undergrad. So we visited, and we could tell from just one Sunday that things were different here. This is the type of church that we wanted to attend. In fact, this is type of church that I wanted to work for and work with in embodying the mission of God in the world.

Those are the steps that brought me here. Like Jonah, I ran and hid and denied a little bit along the way; I’ll even admit that I have cursed my share of leafy trees. But it is clear to me looking back on my story so far that God was shaping me – through parents who modeled community life and gave me a love of church, through a community that encouraged in me a love of Scripture, through preaching classes I did not want to take, through professors and mentors, and through a hundred other people, skills, and situations – to minister to God’s people.

So, as I stand here today, I have many emotions. I am excited. I am grateful. I’m a bit scared. But I’m confident that God will use you in this next year to shape and challenge me in ministry, and I’m hopeful that God can use me to shape and challenge you as well. I’m not exactly sure what that will look like, but I can’t wait to see what the God who clears a path through roaring waters, who reveals a way in the wilderness, who makes a stream in the dessert, and who provides a ministry position in Churches of Christ for a woman (!) will do among us in the next year.

It was hard for many to imagine this day would come. But, to the one who is able to do immeasurably more than all we can ask or imagine, to God be the glory in the church – in this church, in you, and in me – to all generations, for ever and ever. Amen!

As we work out the remaining glitches in transferring the old site’s content, please let us know what problems you encounter and we’ll put it on our fix-it list! Right now, as some of you have noticed and reported, the article links are broken (and I assume this carries over to the other pages under the Resources tab as well). Thanks for bringing this to our attention!

In fact, the bulk of gal328.org is now organized under the Resources tab: the articles and essays by Lance Pape, Katie Hays, D’Esta Love, Mary Lou Hutson, Dale Pauls and many others; the congregational statements and studies on gender from Manhattan Church of Christ, Stamford Church of Christ, and others; the amazing and extensive annotated bibliography of study resources amassed by Christopher Hutson and others. Also under Resources you will find a map of gender inclusive Churches of Christ, based on data compiled by Lynette Sharp Penya and Stephen Johnson of Abilene Christian University, and a page listing links to other organizations such as One Voice For Change.

As we move forward together, sisters and brothers, let’s give thanks to those who started this good work. There are so many people who have gone before us, seeking to make the way straight, and it’s not been easy. Let’s honor them and their work by taking it up in our turn.

The time is now.